Global equity markets continued their rebound from earlier this year, despite struggling in the final month of the quarter. By the time the third quarter closed, investors saw that:

It should be noted that the positive third quarter came after what many will see as validation of that September Swoon theory – when the month of September doesn’t treat equities particularly well. In fact, this past September, we saw global equity markets reverse course, halting the five straight positive months enjoyed by U.S. equity markets as:

It seems as if the mostly positive economic news from August gave way to a mix of negative and positive news during the third quarter, which might have contributed to the markets’ retreat during the final month. But despite September’s retreat, Wall Street was generally optimistic as the economy continued to gradually reopen for business.

For the second quarter of 2020 every one of the 35 MSCI regional indices and all 37 country indices were positive. For the third quarter of 2020, all 35 of the MSCI regional indices were again positive and 30 of the 37 were also positive. The 35 out of 35 statistic is especially impressive because it was not so in September – as the last month saw all 35 retreat to end the quarter.

The best regional performer went to the MSCI Nordic Countries Index – which includes Denmark, Finland, Norway and Sweden – as it jumped 13.78%.

During the quarter, investors digested a lot of economic news and corporate earnings announcements and while there were a few surprises along the way, the markets did not react strongly one way or the other. Many on Wall Street might suggest, however, that the biggest news of the quarter was from the Federal Reserve.

More specifically, the Fed announced a shift to an average inflation target, suggesting that it was willing to let inflation trend above its 2% target to “average” the periods of time where inflation was below 2%. The result is that rates are likely to remain low for quite some time and that in turn is generally good for equities – especially growth names.

On September 30th, the Commerce Department reported that its “Third Estimate” of 2Q2020 GDP improved marginally to a decline of 31.4%. But saying it improved marginally seems disingenuous on its face because this 30%+ decline is on the heels of the 5% decline in the first quarter. And whether the number is 31.4% or 32.9% (from the second estimate), it’s still the worst quarterly decline in history – by a long shot. 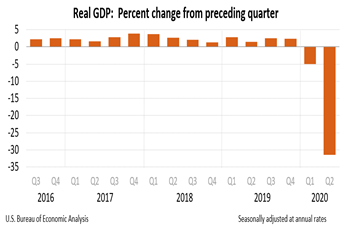 Toward the end of the quarter, the National Association of Realtors released Existing Home Sales Data for the month of August and not only was August the third consecutive month of positive sales gains, but all four major regions of the country experienced month-over-month and year-over-year gains.  Consider these eye-popping stats:

Mid-way through September, the Census Bureau issued a press release that can be summarized as follows: retail sales have been leading the 2020 recovery and since June have exceeded February’s pre-COVID levels. Specifically:

On September 1st, IHS Market ran the headline screaming: “Fastest manufacturing expansion since January 2019” and then wrote the following:

“August data signaled a solid improvement in operating conditions across the U.S. manufacturing sector, with overall growth accelerating to the strongest since early- 2019. The upturn reflected faster increases in output and new orders, with firms also indicating a renewed rise in employment. Moreover, companies registered the highest degree of confidence in the outlook for output over the coming year since April 2019 amid hopes of further growth of client demand.”

In addition, the following was reported:

On September 3rd, it was reported that:

Research firm FactSet reported that for the second quarter, there were only 53 of the S&P 500 companies issuing quarterly EPS guidance, which was the lowest number of companies issuing guidance since FactSet began tracking this metric in 2006.

As of September 25th, only 67 companies have issued guidance for the third quarter, which is well below the five-year average of 104. And if that number of 67 holds, it will be the second lowest number of companies issuing guidance behind the record set last quarter.

The first quarter of 2020 was difficult for almost all investors, the second quarter was almost the complete opposite, and the third quarter was good for most investors as all the major asset classes and styles turned in very respectable – and most importantly green – numbers across the board.

For the quarter, Growth continued their dominance over Value names and Emerging Markets turned in another very positive quarter. Interestingly, the gap between Growth and Value is shrinking, as Value outpaced Growth for the last month of the quarter. Global REITs continued to struggle and while the quarter was positive, the YTD is still very red.

Reviewing the sector returns for the third quarter and YTD through September 30, 2020, we saw that:

Here are the sector returns for shorter time periods: