Global equity markets had a volatile fourth quarter, but when the final Wall Street-bell rang in the New Year, global markets recorded very decent numbers, as the good returns from the first and third month sandwiched a less than stellar second month.

The other positive themes were helpful consumer confidence, red-hot housing prices, an active Federal Reserve, and earnings that came in better than expected.

But for the fourth quarter, there was one new theme that certainly impacted market performance – namely the emergence of a new COVID-19 variant that caused investors to seek shelter in safe-haven assets and caused a mini-rotation from growth to value names in late November. But as more data became known, Wall Street shrugged off those November worries.

Again, the themes that helped drive market performance this quarter have been on Wall Street’s radar all year and did not magically appear when the fourth quarter kicked off – except for the new omicron variant. But other than that, the worries of rising inflation; the Federal Reserve’s schedule of remaining accommodative; declining consumer sentiment; red-hot housing prices; and supply chain issues have all been around for the whole year (inflation has gone up every month in 2021, for example).

But the fourth quarter did see a few more topics added to that long list of events that could push markets around, including:

In contrast to November, U.S. equity markets were overwhelmingly positive for the month of December, reversing November’s overwhelmingly negative performance.

But it wasn’t just U.S. equity markets that performed very well this month – developed and emerging markets outside the U.S. turned in great performance too – with many major developed markets jumping more than 6% and one developing markets gaining more than 8%.

For the month of December:

But investors looking outside the U.S. for the month of December saw overwhelmingly positive performance too, as all 36 developed markets tracked by MSCI were positive for December, with 12 of the 36 jumping more than 6%.

And performance for emerging markets was almost as great, as 32 of the 40 developing markets were positive in December, with EM Latin America ex Brazil leaping more than 8%.

The overall trend for sector performance for each month of 2021 and each of the four quarters was good, but the performance leaders and laggards rotated throughout, giving investors a few mini sector rotations throughout the year and the final quarter.

Reviewing the sector returns for just the fourth quarter of 2021, we saw that:

As the quarter was coming to a close, the Bureau of Economic Analysis reported that real gross domestic product increased at an annual rate of 2.3% in the third quarter of 2021. In the second quarter, real GDP increased 6.7%.

It was the third and final estimate from the BEA. In the second estimate, the increase in real GDP was 2.1%. The update primarily reflects upward revisions to personal consumption expenditures (PCE) and private inventory investment that were partly offset by a downward revision to exports. Imports, which are a subtraction in the calculation of GDP, were revised down.

On the last day of the quarter, the Department of Labor reported that unemployment rates were lower in November than a year earlier in all 389 metropolitan areas.

“A total of 139 areas had jobless rates of less than 3.0 percent and 2 areas had rates of at least 10.0 percent. Nonfarm payroll employment increased over the year in 100 metropolitan areas and was essentially unchanged in 289 areas. The national unemployment rate in November was 3.9 percent, not seasonally adjusted, down from 6.4 percent a year earlier.

In November, Lincoln, NE, and Logan, UT-ID, had the lowest unemployment rates, 1.1 percent each. El Centro, CA, had the highest rate, 15.5 percent. A total of 245 areas had November jobless rates below the U.S. rate of 3.9 percent, 131 areas had rates above it, and 13 areas had rates equal to that of the nation.

The largest over-the-year unemployment rate decrease in November occurred in Kahului-Wailuku- Lahaina, HI (-9.4 percentage points). Rates fell over the year by at least 4.0 percentage points in an additional 12 areas.” 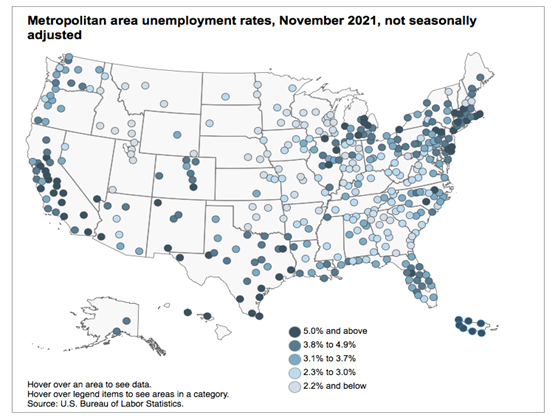 Right before the Christmas holiday, the U.S. Bureau of Labor Statistics announced that the Producer Price Index for final demand increased 0.8% in November. Further: 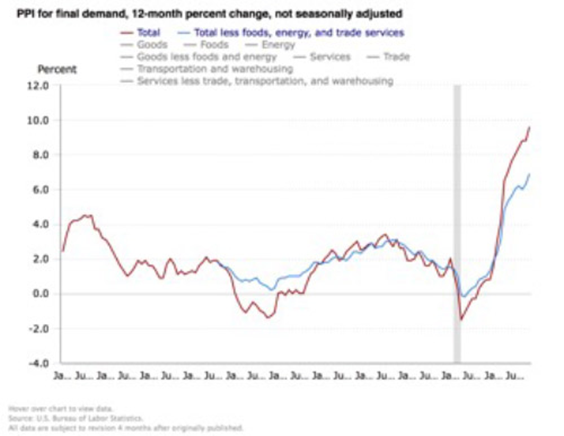 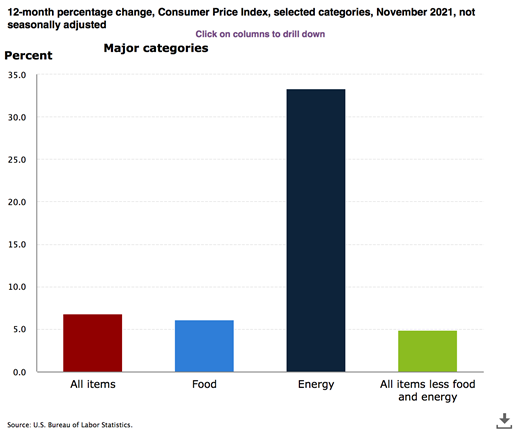 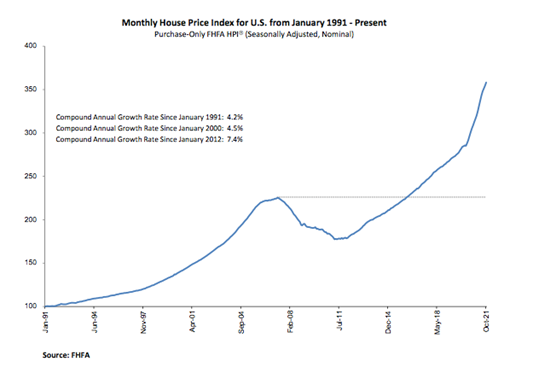 On December 23rd, the U.S. Census Bureau and the U.S. Department of Housing and Urban Development jointly announced the following new residential sales statistics for November 2021:

According to State Street, "the more of their portfolios that professional investors are willing to devote to riskier as opposed to safer investments, the greater their risk appetite or confidence." The index is global and tracks more than 22 million transactions annually in 45 countries.

From the State Street release this week: 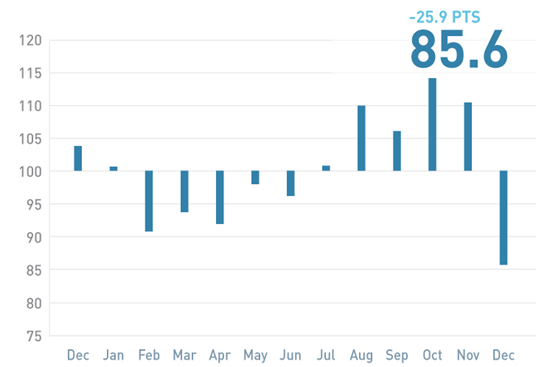 “Investor sentiment soured notably at the end of the year with the Global ICI registering its largest monthly decline in the history of the index. The sudden emergence of Omicron and the hawkish pivot from the Fed drove some of most volatile swings in the equity markets all year. Sentiment in Europe was the weakest, with many EU countries again implementing travel and mobility restrictions, while North America registered its 7th biggest monthly decline.”