Markets Have Worst Quarter Since 1Q2020

But maybe worst news was that the bond market suffered its worst quarter since 1980.

Volatility and oil prices spiked this quarter, driven by a host of issues, including Russia’s invasion, rising inflation, supply chain issues and the Federal Reserve’s timing and size of rate hikes (we saw a 25 basis point hike in March).

Investors were unhappy with the quarterly performance around the world, as 35 of the 36 developed markets tracked by MSCI were negative for the first quarter of 2022, with only MSCI Pacific ex Japan advancing. And for the 40 developing markets tracked by MSCI, 26 of them were negative, with many posting staggering losses, including MSCI Eastern Europe that dropped almost 60%.

March Could Not Lift the Entire Quarter

U.S. equity markets reversed the negative course of the quarter’s first two months and ended March in positive territory. But it was still not enough to overcome the biggest two-month drop (January and February) since March 2020 as markets ended the 1st quarter of 2022 in the red – the first since the 1st quarter of 2020.

For the month of March:

The overall trend for sector performance for all 3 months so far in 2022 was mixed and the performance leaders and laggards rotated throughout, giving investors a few mini sector rotations each month and during the quarter.

Reviewing the sector returns for just the first quarter of 2022, we saw that:

The dominant theme this month (besides Russia/Ukraine) revolved around whether the Fed might need to raise short-term interest rates more quickly and more often, eating into future profits, especially within the high-flying tech names.

Then at the March meeting, the Federal Reserve moved its fed funds target rate from near zero to a range of 0.25% to 0.50%. It was the first rate hike since 2018. 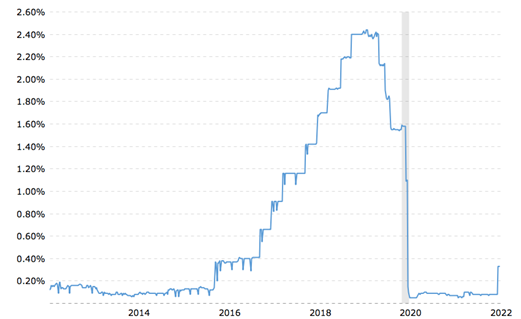 But the Fed also released the so-called “dot plot,” which shows where individual Fed officials expect interest rates to be.

And given the surge in inflation numbers – from the perspectives of both consumers (CPI) and producers (PPI), the majority now expect seven hikes in 2022, four in 2023 and none for 2024. (In other words, there could be a rate hike at every remaining Fed meeting this year and at half the meetings next year.)

If this comes true, it would be higher than the Fed’s estimate of the long-run neutral rate, (which is 2%), and would suggest a more hawkish policy that could be more restrictive to growth.

Interestingly enough, when the Fed raised rates 25 basis points and released its “dot plot,” stocks rallied, suggesting that Wall Street appreciates the path that has been outlined.

But The Fed Was Not Unanimous

By its own metrics, however, it was becoming increasingly difficult for the Fed to forestall a rate increase at least in the range of 0.25%.

In fact, buried in a footnote of the Fed’s statement was this nugget:

“Voting against this action was James Bullard, who preferred at this meeting to raise the target range for the federal funds rate by 0.5 percentage points to 1/2 to 3/4 percent.” 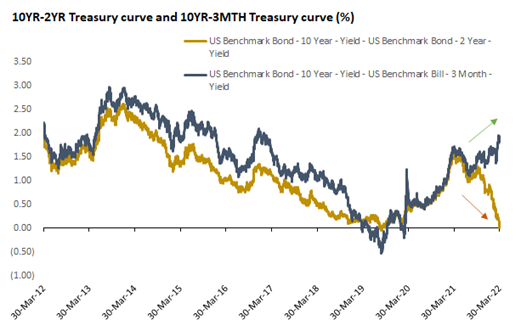 Two days before the quarter ended, the Bureau of Economic Analysis reported that real gross domestic product increased at an annual rate of 6.9% in the fourth quarter of 2021.

The Bureau of Economic Analysis reported a lot of information on the last day of the quarter, including that:

The PCE price index for February increased 6.4% from one year ago, reflecting increases in both goods and services.

Unemployment (3.8%) is now nearly at record lows. In addition, the number of job openings exceed the number of unemployed by the widest margin in the past 20 years. 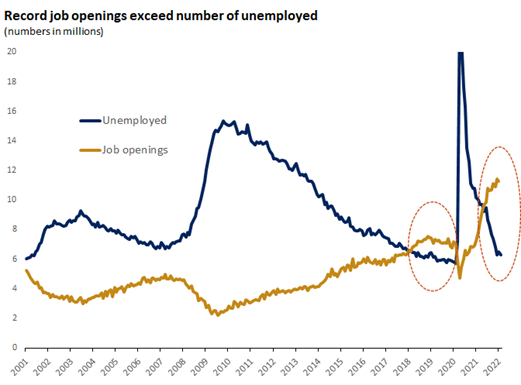 This paradigm suggests that we will be in a tight labor market for a while. And the jobs growth and unemployment numbers reported at the end of the quarter reinforce that notion. 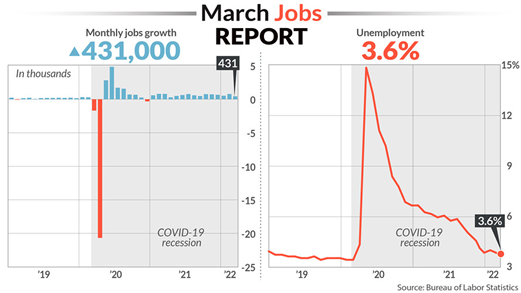 The U.S. Census Bureau and the U.S. Department of Housing and Urban Development jointly announced the following new residential sales statistics for February 2022. 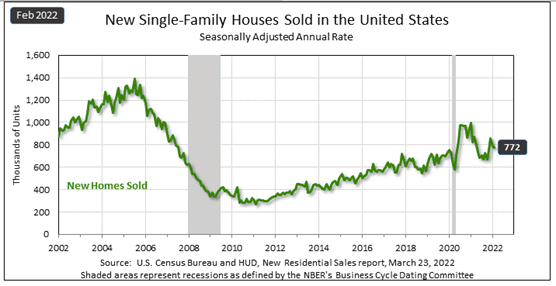 Consumer Confidence is Up

The Conference Board announced that “the Consumer Confidence Index increased slightly in March, after a decrease in February. The Index now stands at 107.2 (1985=100), up from 105.7 in February. The Present Situation Index – based on consumers’ assessment of current business and labor market conditions—improved to 153.0 from 143.0 last month. However, the Expectations Index – based on consumers’ short-term outlook for income, business, and labor market conditions—declined to 76.6 from 80.8.” 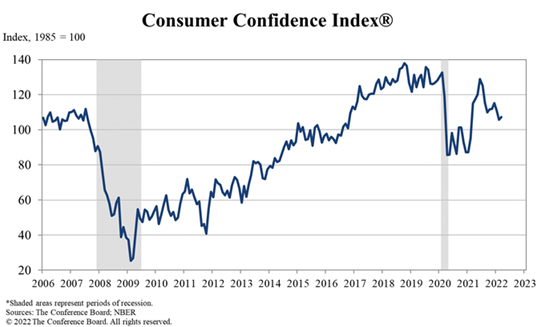 Consumers were mixed about the short-term labor market outlook.

Consumers were also mixed about their short-term financial prospects.