Further, entering the fourth quarter of 2022, the DJIA and S&P 500 are both at their lowest since November 2020, while NASDAQ is at its lowest since the end of July 2020.

The themes that drove market performance in the third quarter were the same worries that drove markets in the first two quarters and towards the end of last year. And the two most dominant themes continue to be inflation and the Fed – with the former rising to 40-year highs and the latter causing Wall Street to worry that the course of rising rates would lead to a recession.

The other themes were at odds with one another at times: rising consumer and investor confidence; rising food and gas prices, negative GDP numbers, a cooling-off of the housing market, better than expected manufacturing data; not-so-great corporate earnings, continued supply-chain bottlenecks and more social unrest.

Investors were unhappy with the quarterly performance around the world, as all 36 developed markets tracked by MSCI were negative for the third quarter of 2022 – with most recording negative returns in the double digits. And for the 40 developing markets tracked by MSCI, 38 of them were negative too, with only the EM Latin America and EFM Latin America and Caribbean Index both gaining about 1%.

The overall trend for sector performance for the third quarter was ugly, as 10 of the 11 S&P 500 sectors dropped with only Consumer Discretionary staying positive. And as if those numbers weren’t bad enough, the performance leaders and laggards rotated throughout the quarter and the ranges were substantial.

Here are the sector returns for the second and third quarters of 2022:

Reviewing the sector returns for just the third quarter of 2022 and the first nine months of the year, we saw that:

GDP Down in 2nd Quarter

The Bureau of Economic Analysis released their third estimate of 2nd quarter GDP and announced that it decreased at an annual rate of 0.6%, following a decrease of 1.6% in the first quarter. This third estimate was the same as was announced in the second estimate in August. 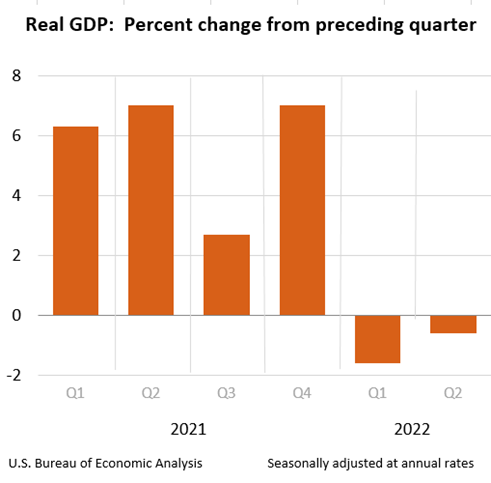 On September 20th, the U.S. Census Bureau and the U.S. Department of Housing and Urban Development jointly announced the following new residential construction statistics for August 2022: 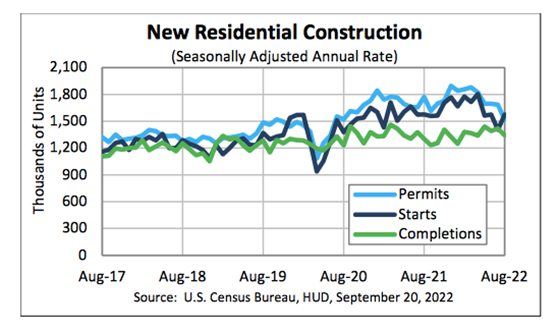 According to data compiled by Bankrate on the last day of the quarter:

U.S. Weekly Averages Over the Past Year 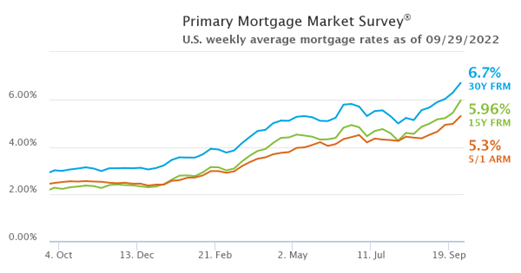 On an unadjusted basis, the index for final demand moved up 8.7% for the 12 months ended in August. 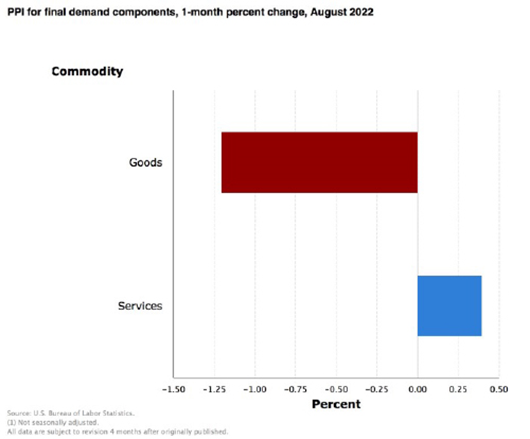 Product detail: In August, over three-quarters of the decrease in prices for final demand goods is attributable to the index for gasoline, which fell 12.7%.

Product detail: Forty percent of the increase in prices for final demand services can be attributed to margins for fuels and lubricants retailing, which rose 14.2%. The indexes for securities brokerage, dealing, investment advice, and related services; loan services (partial); transportation of passengers (partial); portfolio management; and chemicals and allied products wholesaling also moved higher. In contrast, prices for truck transportation of freight decreased 1.9%. The indexes for guestroom rental and for food and alcohol retailing also fell. 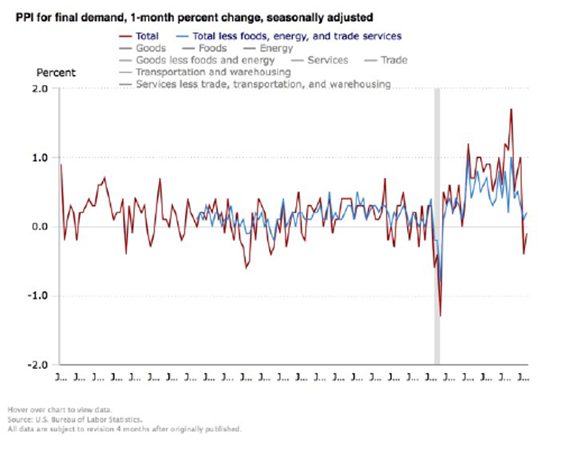 From the Conference Board release:

“The US LEI declined for a sixth consecutive month potentially signaling a recession. Among the index’s components, only initial unemployment claims and the yield spread contributed positively over the last six months—and the contribution of the yield spread has narrowed recently.

“Furthermore, labor market strength is expected to continue moderating in the months ahead. Indeed, the average workweek in manufacturing contracted in four of the last six months—a notable sign, as firms reduce hours before reducing their workforce. Economic activity will continue slowing more broadly throughout the US economy and is likely to contract. A major driver of this slowdown has been the Federal Reserve’s rapid tightening of monetary policy to counter inflationary pressures. The Conference Board projects a recession in the coming quarters.” 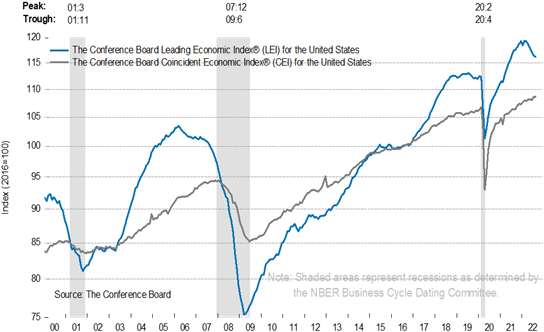 The Conference Board’s Consumer Confidence Index increased in September for the second consecutive month. The Index now stands at 108.0 (1985=100), up from 103.6 in August. 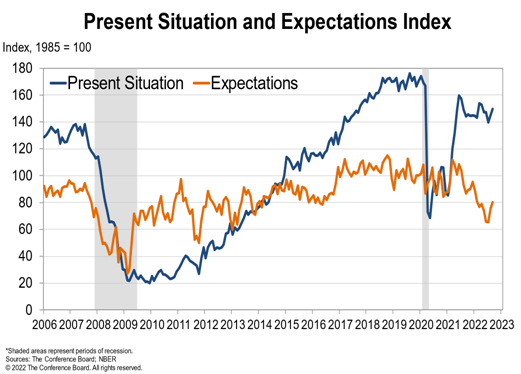 Consumers were more positive about the short-term business conditions outlook in September.

Consumers were more optimistic about the short-term labor market outlook.

Consumers were mixed about their short-term financial prospects. 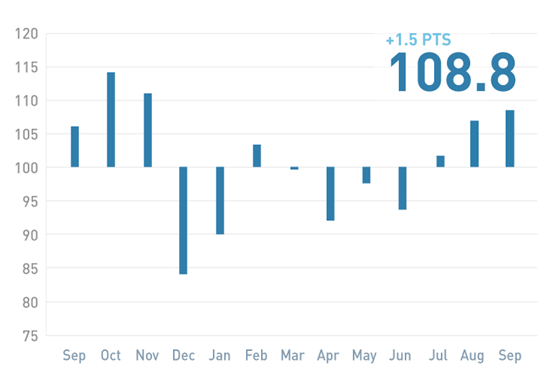 The release further stated that:

“Despite heightened equity market volatility experienced globally, risk sentiment expressed by institutional investors remained steady in September as the Global ICI rose slightly to 108.8. As anticipated, European investors were rattled by a continued energy crisis, diminishing growth prospects and hawkish global central banks; as a result the EMEA ICI tumbled 5.9 points. Going forward, it will be important to monitor whether the dip in European investor confidence persists given the market’s negative reaction to the UK’s recent fiscal plans. Overall, the increase in the September Global ICI can be largely attributed to Asia-Pacific investors as risk appetite grew in tandem with the reopening of borders and easing of restrictions in Macau and Chengdu China.”

“Consumer sentiment confirmed the preliminary reading earlier this month and was essentially unchanged from the month prior, at less than one index point above August. Buying conditions for durables and the one-year economic outlook continued lifting from the extremely low readings earlier in the summer, but these gains were largely offset by modest declines in the long run outlook for business conditions. As seen in the chart, sentiment for consumers across the income distribution has declined in a remarkably close fashion for the last 6 months, reflecting shared concerns over the impact of inflation, even among higher-income consumers who have historically generated the lion's share of spending.” 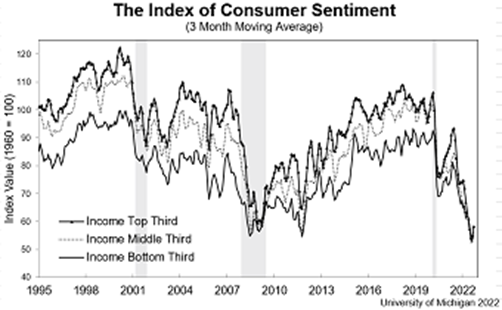 The median expected year-ahead inflation rate declined to 4.7%, the lowest reading since last September. At 2.7%, median long run inflation expectations fell below the 2.9-3.1% range for the first time since July 2021. Inflation expectations are likely to remain relatively unstable in the months ahead, as consumer uncertainty over these expectations remained high and is unlikely to wane in the face of continued global pressures on inflation. 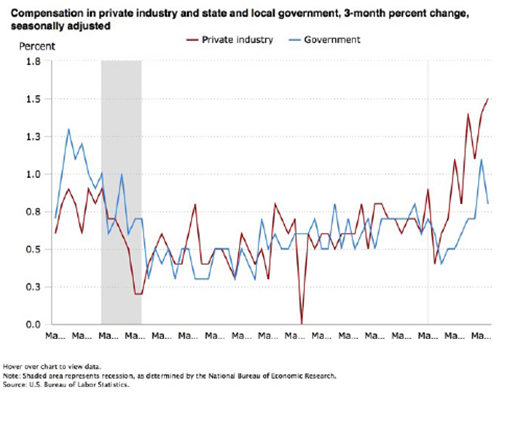